Hello and welcome to your weekly news round up. The details of the winners have gone out, but it would be remiss of me not to mention the fantastic club awards, BBQ and disco. A great time had by all! Thanks to everybody that contributed and got invovled – especially to Dave and Lesley for organising the food, Bill for slaving behind the BBQ with Dave and Chris for the disco. Naturally there were many others that put a lot into that event, so thank you to all!
One small omission from the awards was Ste Wiggins winning the Joe Beswick Runners Runner Trophy – I think he also won the award for most alcohol consumed from a trophy, but that is a different matter. Steve’s endless support of Paul in particular made him a very deserving winner on the night. Outstanding.
Don’t forget, it’s the Green Green Grass tomorrow (Wednesday) and the Gyrn Gallop on the weekend for the #Fellsby section. Another thing to look forward to is The Summer Multi-terrain races on the Wirral just announced. Tuesday evenings in September, first one on 1st September. Details attached. More details on Steve Saunders website at http://www.stevesaunders.co.uk/
As always, Reports in to helsby-race-reports@outlook.com Please (assuming you wish for them to be included :)) Finally a word from Fitzy – master of mischief – regarding his plans for a Helsby RC night out: Friday 4th Sept, please email me (fitzpatrick_chris@hotmail.com) your preference
1. Frodsham  2. Chester 3. Liverpool  If enough interest and its Chester or Liverpool I will organise a mini bus.
Road Running

Young Maximilian of Frodsham travelled to Iceland for the Laugavegurinn ultra maraþon. A mere 55KM and no less! Trotting in with a massive grin on his face and 16th place overall. The winner was clearly head and shoulders ahead of the field finishing a full 30 minutes before second place.
Maximilian spent 5:32:51 out there in varying temperatures and conditions underfoot – he swears that there was 10km of snow at first… you be the judge! Hat tipped Max, great to see that Helsby vest getting around the world. Speaking of which, Geoff Collins has been out and about in one of my favourite parts of the world: Northumberland. Over to Geoff for his report from the Northumberland Coastal run. 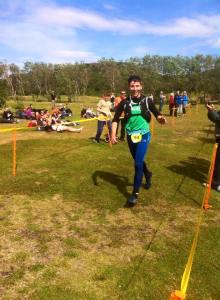 This year I ran this race wearing a green Helsby RC vest for the first time. Confident I would be the first finisher (and only runner) for Helsby! Outside the North East, few people know about this event. My NE running friends jokingly suggested I should say this is a rubbish event and very poorly organised! That couldn’t be further from the truth, this race is a really gem, with beautiful stunning views all the way!
Alnwick Harriers organise this race, this year celebrating its 35th anniversary. Alnwick is of course much better known for its famous castle and garden, which featured in the Harry Potter films. The first ever Beadnell to Alnmouth Race was held in 1979, with only 12 competitors. In the beginning competitors had to choose their own route starting in the sandy bay next to Beadnell Harbour and then heading south running to Alnmouth (approximately 14 miles). This year there were 1,200 entrants and 997 finishers.
Apart from one or two sensitive areas the course is unmarked and competitors choose their own route. The established course makes its way from Beadnell starting on the beach, towards Alnmouth using the coastal footpaths and a couple of short sections on tarmac. From Beadnell Bay you head South via Newton Links, Low Newton By The Sea, Dunstan Golf Course, passing the impressive Dunstanburgh Castle, Craster Village, The Heughs, Cullernose Point, Howick, Sugar Sands, Boulmer, Foxton Beach, and finishes on the beach at Alnmouth. There are rocks, seaweed, lots of sand, running water and the sea lapping at your feet to negotiate. Wet feet are guaranteed.
We left Newcastle in the rain at 7.30, by the time we arrived it was dry cool and much brighter, although there was a quite a brisk South Westerly breeze blowing as we all lined up for the start. Just before the race started I spoke to Mary Rees from Wallasey AC who was the first lady vet 60 finisher today!

The start is always wet, as you follow the retreating tide round the bay, past the bird sanctuary aiming for the top of the sand dunes. You cross Brunton Burn where there is a lot of flowing water.
From High Newton you start to climb on the coastal path towards Dunstanburgh Castle.  The castle stands very majestically on the horizon especially today with perfect visibility.  The path undulates away from the Castle as you head towards Craster a very pretty village where there is the distinctive aroma from Robinson’s Kipper smokery! Onwards towards Boulmer where the Search & Rescue Helicopter station is (which closes later this year).

Then you start a gradual climb along the road out of Bulmer. Trying my hardest to get as much speed on this section. Then you descend down the steps towards Foxton beach. That’s where I noticed a load of people jumping up and down shouting ‘look there’s someone from Helsby here’!  In my excitement I almost lost it as I launched myself at speed onto the beach. On the sand I realise the wind is almost a headwind.  It’s hard going digging in and trying to get some speed on the sand, threading your way past and over the seaweed and rocks.  Finally you aim for the finish arch way in the distance at Alnmouth.

The race was won by Carl Avery in 1hr 15m, first lady was Emma Holt 1hr 29m, both from Morpeth Harriers. I took a more sedate 1hr 55m – at least I was 3 minutes faster than last time.  And you get a lovely quality More Mile long sleeved t-shirt with zip up front and reflective trim! 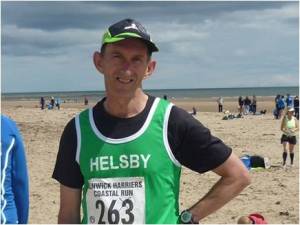 Great work Geoff – certainly a race I think Mrs. Baynham-Hughes would like a go at next year.
Park Run
A handful of Helsby vests out on the Park Run this week. See here for full details:  http://www.parkrun.com/results/consolidatedclub/?clubNum=1721 – Well done to all!