Welcome to this week’s racing news. Apologies it is so late this week. Work deadlines and life got in the way! Sorry for the disruption.
Please remember to send your race reports to:
helsby-race-reports@outlook.com
otherwise we don’t know about them and could miss them. I know a number of you post into Facebook which is great, but it means we generally miss them as they get buried in the whole list of posts. If you’re at a race/ event then please decide amongst you who will put together the report so we don’t miss a thing… and we wouldn’t want to miss a thing now would we 🙂
Essentially all we’re looking for is the following:
– The name of the event and the distance & type; e.g., Sutton 6, Road.
– A small amount of detail from the event to give it some context; e.g., for last week’s LSU it could have read: ‘Long, biblical rain, insanely hilly. Fantastic’.
– The results or a link to the results with any special mentions for performances. e.g., for the LSU it could have included ‘Special mention for Phil Roberts for best swim in an ultra marathon’. Feel free to add more of course, but this gives us enough to form a decent newsletter.
Simples 🙂
This week is a tale of PBs, podium placing and the benefits of running after a heavy night… oh, and Roy’s back! Enjoy.
Child minding rota = more racing!
Finally, with the Borders and the XC season upon us and with ever pressing family commitments I posted this on Facebook this week. If you’re interested then please let me know:
Who’d be interested in joining the Helsby winter Child minding circle? With border leagues and the winter XC coming up it can be difficult for both parents to run or even just one parent to run. Rather than miss out on the fun Fitzy and I came up with the suggestion that we take it in turns to mind the children at the race. It means that you might miss one race in X races (where X is the number in the child minding circle) but you’ll get to do X-1 races which is more than 0!
Should be reasonably straight forward:
– we’ll just have a rota
– the person on the rota for that week must commit to being at the race or find somebody willing to swap
– Parents drop their children off with the person for that day in suitable clothing
– The adult(s) can bring a football, frisby, organise tag or hide and seek, cheering, etc.
– Parents finish race knackered
– Children are returned knackered from running about/ playing
– everybody’s happy!

CBH.
Road Running
Sutton 6
Huge thanks to Geoff Collins for pulling together this race report for us. Nice to see people out competing in the club counters – only two left to go! For details check the race calendar here:
There was a good contingent of 13 Helsby runners at this year’s Sutton 6 10k race, with some new PB’s for some! This was the 33rd event of what originally started as a 6 mile race to raise funds to build Guilden Sutton Village Hall in 1982. More importantly this year the race was a club ‘counter’.
Weather conditions were good for running, with a light wind, the sun disappearing behind the clouds before the race started. This year the race was chip timed for the first time. This seemed to lead to a few problems it would seem! Rather than the now common chip on the number, or disposable shoe tag we got the older reusable button chip worn on the ankle with a Velcro belt!
Of course it’s always a good idea to make sure the chip is attached to you before the race starts rather than left somewhere else!
The course is mainly flat finishing on a slightly lower elevation than where it starts. However there is an incline from the junction of Wicker Lane/School Lane up Porters Hill into Oakland’s for the finish. If you don’t know the area this little hill (by Helsby standards anyway) always seems to catch people by surprise. As someone said to me later they ‘weren’t expected that in an area which looks so flat’!
Fitzy leading the chants of ‘Green Army’ at the start, apparently that’s normal I understand. Although he didn’t appear to have his special water bottle this time. I hoped this wouldn’t affect his performance, or the five Guinness and the large Chinese he consumed the night before!
The race got underway, as usual Jo and Mario making their customary encouraging appearances at different points around the course, and my resident photographer trying to catch everyone in Hare Lane. The pictures are now on Facebook. I don’t know how Jo Lacking managed to elude the camera by the way! An added attraction this year being, West Cheshire marshal Kay entertaining the runners with her cow bell in Wicker Lane!
First home for Helsby was Chris Fitzpatrick in 19th place, 1m 06s faster than his time on last year’s Sutton 6. Adam Gordon 2m 15s faster than last year. Fortunately for Adam the organisers have accepted his time and he wasn’t disadvantaged without his timing chip! First Helsby lady was Jo Lacking. Without doubt the two star performers of the day with new 10k PB’s were Jo Farwell who took a massive 3m 24s off her time in the Ellesmere 10k, and Tanya who took 1m 20s off her Ellesmere time! Well done ladies!
The full Helsby results are:

Ed – Nice work Fitzy, the first of the post heavy night performances!
Warrington Half & 10K
The Warrington half (or the English Half Marathon as they like to call it) received headlines last year primarily due to the incredible extras Gareth Boyd was treated to by paying extra for the VIP treatment (might be worth speak to him before signing up :)) however this year the headlines are for all the right reasons. Thanks to Jane Bishop and Neil Hughes for on the ground details. 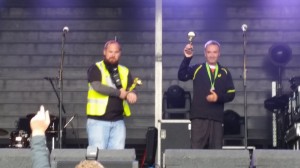 In brief: Great conditions for it, cool and fresh with the sunshine breaking through, plenty of spectators lining the route, a new course this year starting near to and finishing at the Golden gates…Certainly one to consider for next year. All you need to know really! Well, ok if you want a little more then how about new member and long suffering wife of Chris, Gill Fitzpatrick, smashing out a new PB; comfortably dipping under the hour in 57:34; fantastic running Gill! 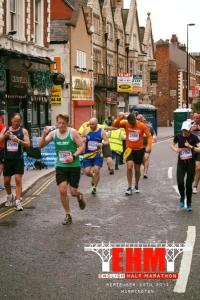 Still not enough? Well Helsby’s own lightening bolt Colin Bishop came in 2nd overall and 1st in age category with a time 35.02 – with so many fantastic performances it’s easy to take such results for granted and miss just how much Colin puts into his running so it’s nice to see the rewards being reaped by the fastest M50 in the country!
PBs weren’t just restricted to the half, Neil Hughes stormed around to pick up a new PB of 1:48:36. Huge congratulations.

The Roy Gaskill 10K
Not sure what race it was, but here is the race report from Roy that he posted on Facebook. Please read the instructions at the start of the post Roy so next time there is no chance of us missing your results.
‘I finished 113 in a time of 46.40 grand 10k at aintree racecourse’
Well done Roy, great to see you back racing again.
Fell Running
King John’s Castle
Details for this fell race are a little vague as it would appear the organisers haven’t mastered the internet… or even know it exists as there was no amount of googling that could return me the results or even any details other than other clubs like ours mentioning it as a good one for an entry into fell running. This means that unfortunately I don’t have the results yet, but we’ll ensure that once we get them we’ll get them put up on the blog for the long term record.
This race was the last of the new to fell mini series which has proved very popular within the club – certainly something to continue next year in one form or another. It’s resulted in plenty of wide eyed looks and stories of trauma, but above all dramatic scenery, smiles, exhilaration, soup, cakes and post race libations! … plus more than one additional member of the #Fellsby subsection.
Over to Laura for her race report, which is also a little vague, but the reasons for this will become apparent 🙂
More than 10 green vests turned up for King John’s castle fell race on a fabulous sunny Sunday. The field was pretty small with teams from Helsby, Denby and Buckley battling it out. The 5 mile course ended up nearer 6 as most of us went a bit wrong but there were no tears and we were all still smiling at the end! Well done to Emma Barns who completed her first fell race. A great one to try next year if you want to join team #Fellsby.
Adam Gordon managed the second of two gaffs for the week by throwing away first place due to a wrong turn, allowing Jim Jones to take the spoils for Helsby. I’m so sorry that there are no results out so I can’t tell you who came in first that was competing in the New to fells mini series from the gents. On the Ladies side, Laura Baynham-Hughes was first lady back for Helsby and first for the new to Fells mini series on the day. Laura’s performance marked the second piece of annecdotal evidence that the route to a great performance is in the prepartion the night before (Seen dancing in Rosies at 2am on the morning of the race meant Laura arrived with just minutes to spare after being convinced that the best hangover cure was a fell race). Fantastic performances all round by the sounds of things.
Cross Country
No races, but remember the season is coming up soon so get your spikes ready!
Park Run
Delamere and Widnes saw green shirts in action. here’s the link for details:
http://www.parkrun.com/results/consolidatedclub/?clubNum=1721
Please see the race calendars:
https://helsbyrunningclub.files.wordpress.com/2012/08/2015_09_20_helsby_rc_calendar.pdf