Firstly,  quick reminders from Paul Foster about the L&D cross country race at Sefton Park and Chris Fitz  about the upcoming Xmas do…
L&D Cross Country
The next Liverpool and district XC on Sat 26th November Sefton Park Liverpool at 2pm is a pre entry event.
All names have to be submitted a week on Wednesday 16th November so if anybody would like to run please send me your name and date of birth to:
mooeyf@hotmail.com
So please don’t forget to email me with your details..
To all new runners this is still a free event for every Helsby runners as long as you are first claim and wear your Helsby vest..
Thanks Paul..
Christmas Do
Helsby Christmas night out will be on Saturday 10th Dec, usual set up, starting in Helter Skelter at 7.30pm, Christmas jumpers a must, greener the better
Thanks
Chris
Border League Race 2 at Chester.
Fitzy sent in this report from the race.
There was a great turn out for the second Border League race at Chester on Sunday. A total of 36 runners helped give the Ladies team 2nd place and the Mens team 4th place on the day.
We had a very chilly start on Sunday morning at our second borders league race of the season in nearby Upton, which was being held by West Cheshire on the very fast Spring 5 course. This is a very popular race in April when it’s warmish, and Sunday seen a record number of runners turn up, 431 in total, which is a record by 61.  Another brilliant turn out by the green army seen 36 of us in total take counters.
Some great performances on the day seen Colin Thompson first home for the men, followed by myself and Bish, also a quick note to people turning up and helping us out after racing the night before, CC, take a bow son, and we even had local celebrity Fell Runners Ben Fletcher and Jim O’Hara helping the men’s team out coming in 4th on the day, and moving us up to 5th in the Division 1 table. 7 men ran subs 30 mins and top 10 counter all within 91st place, which just goes to show we have real strength in numbers now, exciting times ahead!
Alison Halsall, followed by Joanne Lacking, and Laura BH made up the top 3 for the women and a great performance to bring them in 2nd on the day, however they are still rooted to the bottom of the top division because of race 1’s penalty points. It wont be long before they are heading up that table if they continue to put in great performances like yesterday.
The next race is on Dec 4th and is at Birkenhead Park, would be great to get decent numbers to this one again, although it will clash with a cross country race so i will be in contact for a bit of careful planning so we don’t get any penalty points for either team.
Thanks again for the support of Jane, Mario and Joe out on the course as always 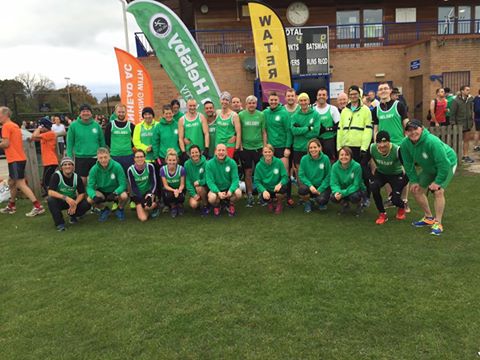 Individual race results:
http://tinyurl.com/zjtow2v
Team race results
http://tinyurl.com/juxdlhn
Overall team standing after Race 2
http://tinyurl.com/z8su52w
Dublin Marathon report by Jo Farwell.
This was my second dalliance with the Dublin Marathon, both as support entourage, but this time with the ‘Green Army Girls on Tour’
The group of 10 set off to the Emerald Isle at not even the crack of dawn on Saturday, yes there really are two 5 o’clocks in the day! All runners were very reserved on the flight out, lots of nervous giggles and alas no ‘flight juice’ for Nesta.
Upon arriving to our extremely sumptuous guest house and dumping our bags, we set off in search of the best Irish Breakfast in Dublin. All I can say is thank goodness we didn’t use the facilities before we’d ordered!!!
It was then off to the Expo and a mammoth 6 mile hike later the GAGs had registered, no turning back now, and we were back at our extremely sumptuous guest house to check in, and for room swaps, blimey, so soon, it was only early afternoon!
Once settled into our new rooms, air freshener and breakfast purchased for the morning, some Guinness and a bit of carbo loading were in order, not to mention a few more nervous giggles and a ‘bit of magic’! It was then back to our extremely sumptuous guest house for an early night and an extra hour in bed…. 
After a very noisy night, that’s those in the room without the air freshener, race day was upon us, and more nervous giggles on the way to the start, fortunately it wasn’t a 6mile hike to get there.
Now, I can’t tell you much about the race, but with the start and finish just outside the city centre, the course of one lap took the runners north of the river for the first half, around the zoo, (leave that monkeys banana alone now) and through the very scenic Phoenix Park, or so I’ve been told. It’s then back south over the river for the second half, around the University College Dublin with the final straight two mile run back to the finish.
Now the girlies did a ‘grand’ job, staying together until about mile 11, then finding their own pace…. results are
Jenny – debut marathon – 4.36.56
Louise – 4.36.56
Nesta’s first road marathon – 4.55.39
Donna’s second marathon in 6 mths – 5.05.09
Epic running from all 4 GAGs!!!

Have to say, the support entourage did a ‘grand’ job too, kept popping up like Fenella the Kettle Witch or rather Joe and Mario, when you least expect it! Walking near on 12 miles we managed to see the girls at 4 points throughout the race, all looking great throughout. Can’t say the same for the supporters mind, not even time for a pee stop, never mind coffee and cake!!
A well earned post race Guinness to celebrate was thoroughly deserved and enjoyed by all, no more nervous giggles, just lots of laughs and crazy statements like ‘I really enjoyed that’!!
The remainder of the weekend was spent re-hydrating and re-fuelling with good food, good drink, good friends and lots more laughs and of course a mandatory trip to the Guinness factory.
Well…. when in Dublin!
A great weekend was had by all, but last note has to go to Louise McEveley, who not only accepted her mission and carried it through not once, but twice…..!! 😉
Brilliant report, cheers Jo.
Ben Williams sent in this report from the Kilburn Kanter
I ran the LDWA Kilburn Kanter on Saturday. This is a great little event taking in footpaths and tracks in the countryside near Thirsk. The weather was grim, with persistent rain giving way to hail on the moors, and underfoot conditions were tough in places. The scenery and atmosphere were fantastic though, with plenty of banter between runners and lots of support from the checkpoints.
There are four big climbs on the 24-mileroute, and having done this event twice before I feel that I was better able to judge how much energy to put in on different sections.
I was in a cat-and-mouse battle with another runner over the last couple of stages, which helped keep my pace up on the sections where I normally tire. I completed the event in 4 hours 54, 27 minutes quicker than last year, so pleased with that. No pictures, I didn’t dare get my phone out of my pocket in the monsoon.
Results may appear here sometime –
http://tinyurl.com/o2vv87k
parkrun
Helsby members were in action at Delamere, Ellesmere Port and Widnes parkruns. Full, consolidated results are below.
http://tinyurl.com/kvq2x25
Thats it for this week, as usual can you please send your race reports to:
helsby-race-reports@outloook.com
Cheers
Gaz