Helsby RC Weekly Update (29-6-2015 to 5-7-2015)
Parkruns:
Helsby runners were out at Delamere, Widnes, Ellesmere Port and Warrington Parkruns. Highlights were Colin Bishop winning at Widnes and Geoff Collins setting a PB at Ellesmere Port. Well done both. Full, consolidated Helsby Parkrun results for last week and be found at the link below.
http://tinyurl.com/kvq2x25
On Wednesday there was the Ladies Forest park 5K with a strong showing from Helsby runners, first home for the club was Jane Ashbrook who was also runner up in her age category. Great running Jane, full results below. 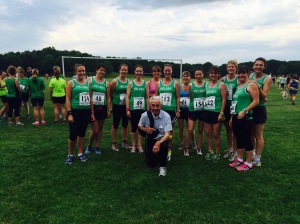 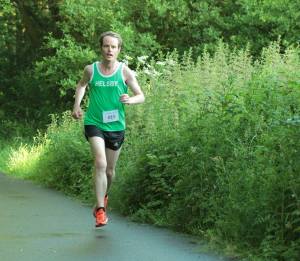 For anyone who has done the Halewood 5K it’s essentially the same course with a little extra added at the start, therefore pancake flat and potentially a very fast course. Unfortunately it was a baking hot evening so it was quite a tough race but as usual a very well organised race by KH and we had some free race pins thrown into the goody bag at the finish. 3 Helsby runners toed the line with myself grabbing 2nd place in 23.22, Carl Pratt an excellent 14th 26.42 (his warm up gig for the Tour of Merseyside this week) and Tom, who is starting to find his racing legs again, gaining 19th in 29.53. All race results are in the following link:
http://tinyurl.com/pdk858z
Saturday
Jackie Kearsley writes from the Saunders Lakeland Mountain Marathon…..
The 37th Saunders Lakeland Mountain Marathon was held this weekend. Lesley and I arrived at the start at Torver, just down the road from Coniston on Saturday morning, the thunder and lightening had just passed over but within a couple of hundred meters of climbing we were in a real pea souper with visibility down to a few metres.
Lesley wanted to practise navigation and this was an ideal opportunity if not a little in at the deep end! The first few check points were well spaced, the first not far from the start, the second miles away on Grey Friar above the Duddon Valley. There were many route options so everyone soon disappeared; we plodded onwards on upwards in splendid isolation overs Goats Hause, then traversed high level over Brim Fell and Swirl How towards Grey Friar to find a “tarn between hills” which should have been renamed “puddle hidden by tussocks” as it was no more than 2m across and could not be seen from more than 2m away.
Competitors came from all directions in search of this obscure mini target which was eventually found to everyone’s relief. Onwards over towards Dow Crag and another pass by of Goats Hause, which now looked completely different as it was gradually clearing. Over the Old Man of Coniston and through the coppemines towards the lovely placed, sun basked overnight camp at Tilberthwaite.
Ed Halliwell and his son James were there, doing their first mountain marathon, having done a great time in the Beda Fell race, the special adult and child. class. Both seemed happy!   The usual feast of beanfeast, noodles, Guinness and cider replenished us and ensured a good nights kip. Sunday saw us clamber up Wetherlam Edge over Swirl How and onwards towards a different part of Grey Fryer, again, before nipping over the Walna Scar back towards Torver. It all looked very different in the clear sunshine!
Well done to everyone, a great weekends varied running and navigating, results
Carrock Fell   Lesley & Jackie 79th  Total Time 13:26:20
Beda Fell        Ed & James       13th                     7:30:05
Sunday:
The amazing Colin Bishop made it 2 wins with first place in the Northern Vets at Radcliffe in a tough, hilly, 2 lap 10K. With first place came the Joan Rhodes Memorial Trophy. Brilliant stuff, Col.
Ben Williams passed on this report from the delightfully named, Fairy Freckled Cow Race:
Sunday saw a big turnout at the Alwen Reservoir for the Fairy Freckled Cow trail race, boosted by six of the Green Army. Jim and I had run the race before, but the others were first timers. It’s a lovely course of about 11k on tracks and trails around the reservoir, with a little hill climb at the halfway mark just to maintain interest. There was more interest than usual this year as the heavens opened just as everyone hit the hill – some thought it was hail, I’m not convinced but that tells you how hard it was raining.

As an unexpected added bonus, Joe and Mario were supporting around the far side of the lake, in one of the remotest areas in North Wales. I have no idea how they got there, but it’s such a boost to get their support.
Jim finished first for Helsby, and I think about 17th overall, which is a cracking result. I was pleased with my run, and knocked about 2 and a half minutes off last year’s time. Louise pushed me all the way – every time I looked over my shoulder she was there, and I suspect if she didn’t have a self-inflicted poorly head she would have beaten me. Steve ran well after doing some crazy obstacle race the day before, and Graham and Dave can both be pleased with their running.
And we all got a T-shirt with a picture of a cow wearing a tutu… what’s not to like?
Also on Sunday was the Moel Siabod Fell Race (5.4 miles with 2300ft climb) on Saturday which was completed by Tim Palmer and Phil Gillard. Over to Tim for a short report – “very much an up and down race. It was nice sunny day with a strong headwind on way up and hence tailwind on the way down. Results are at:
http://www.wfra.me.uk/1458.xls
Our times:
Phil 74:31 46th
Tim 76:31 49th
The winning time was 51:55
Excellent after-race river for cooling your feet; followed by an excellent goulash for the Moel Siabod cafe. Definitely worth doing”
Carl Pratt also completed the Southport Half Marathon in 1:33:30 as the part of the week long, 6 race, 53 mile Tour of Merseyside. Well done and keep going, Carl!
Missing from last weeks blog was a report from the Penny Lane Striders 10K which was also a Helsby club counter road race. Adam Gordon kindly took time to bring us up to date on the race.
The Penny Lane 10km on Sunday 28th June saw 15 Helsby runners competing for points in the 5th counter of the Helsby Road Champs (including a student who hasn’t had his running shoes on for 9 months!).
Although on a flat course, the wind on Otterspool promenade made for a race of two halves with an easy(ish) outward 5 followed by a considerably harder return leg.  The race was won in 32:38 by Haccalu Hundeessa of Liverpool Harriers, with Colin T coming in first for Helsby in 11th position overall.  Lots of good running from the Green Army with some great category positions too.
A sprint for the line saw Carl edge in front of Ian L but if the Helsby championship points are awarded on “net time”, it looks like Ian may have nicked 4th place!  Who decides?
Tanya Meredith recorded a superb PB and is in a rich vein of form at the moment while the Helsby Men were the 5th placed team, although this might have been better had the organisers recorded Chris F as a Helsby runner.
Lastly a quick reminder about the eagerly awaited Annual BBQ, Presentation Evening and Chris Igoe Disco on Friday 17th July. An email will be send out this week from Lesley and Dave  with catering details and time.
Please send all race reports to helsby-race-reports@outlook.com
Cheers
Gaz